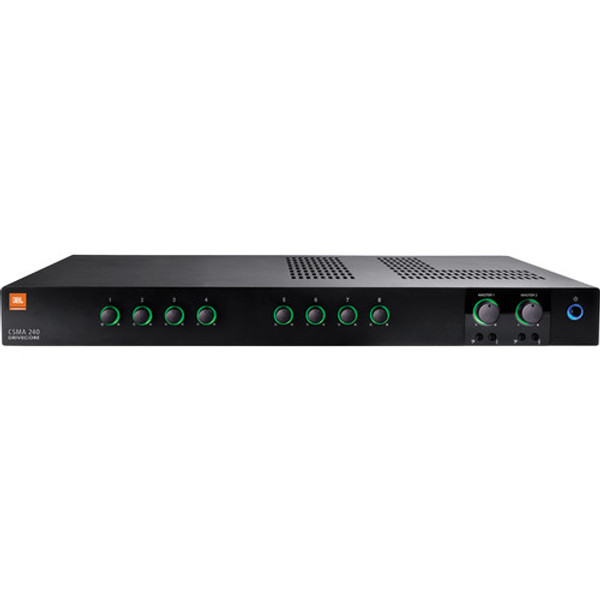 The JBL CSMA240 is a mixer/amplifier with eight mixer-channel inputs and two output channels. It's capable of reaching 40W of peak power with 5W per channel. The unit's front panel sports volume controls for each channel, as well as two master volume adjustment knobs, two sets of bass and treble controls, and a power switch. The volume controls are illuminated so they can be seen and operated in darkened environments.

The amplifier, capable of driving both eight and four Ohm loads, can be used with 70V and 100V distributed audio systems without the need for a separate transformer. On its back panel you'll find euroblock connections for mic/line inputs, as well as unbalanced RCA inputs, speaker connections, dip switches for input routing, and more. The unit is also equipped with two RJ45 connectors for use with JBL CSR-V in-wall volume controls (available separately).

This Commercial Series mixer/amplifier boasts such features as voice activating ducking (useful for paging over background music), priority muting for channels one and five, and a sleep mode which automatically powers down the unit when no audible signal has been received for longer than 30 minutes. Also, with two auxiliary outputs, you may connect to an additional amplifier, though the master volume and tone controls will have no bearing on the resulting signal.